The Portland Trail Blazers have signed general manager Neil Olshey to a multiyear contract extension, the team said Thursday. He also has been named president of basketball operations.

Olshey has served as the team’s top basketball executive since the Blazers poached him from the Los Angeles Clippers in June 2012. During his first two seasons in Portland, the Blazers improved from 33-49 to 54-28. They entered Thursday in second in the Western Conference at 27-8. 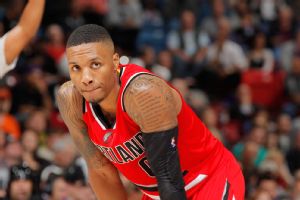 Rocky Widner/Getty ImagesPoint guard Damian Lillard, the league’s eventual rookie of the year, was the centerpiece of general manager Neil Olshey’s first draft with the Blazers.

“Our team has made great strides under Neil’s leadership, and I am excited to extend his contract,” Blazers owner Paul Allen said. “Neil has done an outstanding job as general manager by quickly rebuilding our team into a playoff contender. The franchise is clearly on the upswing, and I hope to see further improvements in the years to come.”

Olshey’s road to the top job in Portland has been somewhat unorthodox. He entered the world of professional basketball by working out NBA prospects for prominent agent Arn Tellem. The thoroughness of those workouts caught the attention of Mike Dunleavy Sr. in 2003, then the coach and lead executive with the Clippers. After a few years in player development and as an assistant coach, Olshey moved over to the management side of basketball operations, where he became Dunleavy’s deputy. When the Clippers fired Dunleavy in 2010, Olshey assumed his job, which he held for two full seasons before departing for Portland after contract negotiations with the Clippers hit a snag.

During his first month on the job in Portland, Olshey chose Weber State point guard Damian Lillard with the No. 6 pick in the 2012 draft, negotiated an extension for forward Nicolas Batum and hired Terry Stotts as coach. In 2013, Lillard was selected as only the NBA’s fourth unanimous rookie of the year.

During the summer of 2013, the Blazers acquired starting center Robin Lopez from New Orleans for rookie Jeff Withey and a future second-round draft pick. This past offseason, Olshey added veterans Chris Kaman and Steve Blake to the Blazers’ second unit.

“This extension is a validation of the efforts of the entire Trail Blazers front office and an endorsement of the level of commitment expected of us by our owner Paul Allen,” Olshey said. “The level of passion for this franchise by our owner, season-ticket holders and fans, drives us to build a team that this community can be proud of.”

On July 1, three members of Portland’s starting five, including All-Star forward LaMarcus Aldridge and guard Wesley Matthews, will become free agents. Aldridge stated last July that he intended to remain with the Trail Blazers long term and sign a maximum five-year agreement available to him only in Portland. Matthews, who has improved steadily during his tenure in Portland, is certain to attract interest in a league that’s bereft of versatile two-way players at shooting guard. Lopez, who will again anchor the Trail Blazers’ interior and pick-and-roll defense when he returns from a fractured hand in a few weeks, will also be a free agent this summer.

Olshey has cautiously guarded the Blazers’ financial flexibility under the salary cap, opting to reserve resources for pending free-agency periods rather than absorb salary to add to the Blazers’ moderate depth. Stotts, who had compiled losing records during his first two stops as a head coach in Atlanta and Milwaukee, was widely seen as a conservative choice in 2012, but he was granted an extension by the team following the successful 2013-14 campaign, in which the Blazers advanced to the Western Conference semifinals.