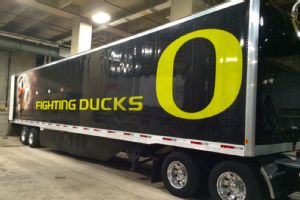 The truck, which left Eugene, Oregon, at 4 p.m. CT Tuesday and arrived at the stadium at noon Thursday at Jerry’s World — thanks to two drivers putting the pedal to the metal with as few stops as possible — is packed with more flash and swagger than any other truck on the road.

It was roughly two decades ago that Nike co-founder and chairman Phil Knight and his top design lieutenant Tinker Hatfield, both former Oregon track and field members, set out to make Oregon the coolest team in college sports. The plan worked, thanks to the devotion of the company — which designed Oregon’s new “O” and gave it cutting-edge technology and looks — and the team itself, whose style of play revolutionized the game.

And while it’s easy to see the complexity of the team’s wardrobe on the biggest of stages, it’s rare to get a behind-the-scenes look at how the engine runs. So we are here as the Oregon equipment crew wheels case after case of gear into one of the two visiting locker rooms at AT&T Stadium, where the College Football Playoff National Championship Presented by AT&T will be played Monday night (ESPN, 8:30 ET).

The first task is putting the nameplates by the lockers. Farr, whose sole full-time job is heading up football equipment, is going through locker nameplates and organizing them by position groups. Quarterback Marcus Mariota‘s name goes on the first locker closest to the door. 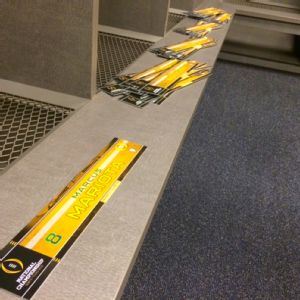 “We put the quarterback closest to the exit because, well, it’s just the way I learned,” said Farr, who worked as a student manager when he went to Oregon and returned to work for the school after odd jobs running retail stores, selling mortgages and working in his dad’s furniture business.

Helping Farr with the nameplates is Osbaldo Escatel, who the players call “Ozzie.” You can tell he loves the job. The smile never leaves his face. Pretty good for a senior whose trip through college was delayed by two tours in Afghanistan with the Marines. Farr also gets an assist from Wasson, who oversees equipment for the rest of Oregon’s teams.

There are 90 lockers available and 105 players, so the redshirts, who will dress despite no chance of getting on the field, will share lockers.

After the names go up, the jerseys come out of the bin. They do not, as has been discussed plenty, feature the school colors of green and yellow. It’s a rarity, but it’s not a first for Oregon. Last year against Arizona, the Ducks wore a similar white, silver and gray combination and wore all white and silver against USC in 2010. 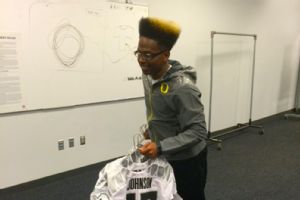 The two looks for the college playoff were actually determined in the spring in a meeting attended by Nike officials, Farr and Oregon head coach Mark Helfrich. “They showed it to us and we signed off,” said Farr. “There actually wasn’t any discussion. The fact is that our tradition has been to not be traditional, and this follows that.”

Oregon wore its home green in the Rose Bowl Game presented by Northwestern Mutual because it was the higher-seeded team. But for the title game, the Ducks have chosen to wear their road whites — even though they are again the higher seed — so they can show the other look they have.

“This is a beautiful uniform,” says Farr. “It would be a shame to never wear it.”

Helfrich defers to Farr more than his predecessor Chip Kelly did. Kelly made it clear when he didn’t like an idea. He was against doing a pink jersey for breast cancer awareness because he felt it was unfair to single out just one cancer cause. And he loved black and ordered it up for his own apparel as much as possible.

Kelly’s motto, “Win The Day,” happens to be sewn on the back collar of the championship game jerseys, but Helfrich did inject his motto, “You Vs. Yesterday,” on some jerseys this year.

After talking about ideas with players and Nike, Farr orders blank uniforms for the following season each October. He sits down with Nike again in February to mix and match the combinations, which are completely schemed out by the time the spring game rolls around. 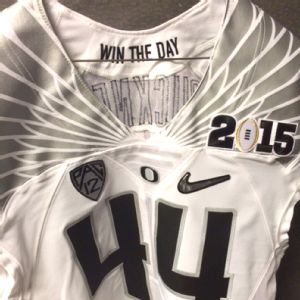 Courtesty of Devon StillThe back collar of Monday’s game jersey has Chip Kelly’s motto “Win The Day” stitched inside.

When the season begins, Farr doesn’t get all the equipment at the same time. While Oregon has a new $68 million football center, one of the things that hasn’t been upgraded is the equipment room. The current room was built in 1995, when Oregon was a typical team with one type of helmet and two different jerseys that lasted a whole season. This season, each Oregon player received seven different helmets, seven different jerseys, six different pairs of cleats and five different pairs of sneakers. Count the pants, the warm-ups, the chinstraps and the 50 different styles of facemasks and there’s nearly 20,000 pieces of gear that Farr’s team barcodes and scans into a system. The overflow goes into an old locker room as the equipment staff makes do with what it has.

Part of Farr’s job is to calculate how much each look is going to cost the school. Nike gave Oregon $600,000 in cash this year, $2.2 million in equipment and another $185,000 to spend as Farr wishes, but even that isn’t enough. That’s why Knight himself writes checks one or two times a year for special uniforms, like this year’s retro uniform the team wore to celebrate the 20th anniversary of the 1994 Rose Bowl team.

The helmets are now being treated in the locker room. This helmet, designed by Hydrographics, has been dipped in chrome paint and painted white to create the wings look. They cost about $650 each. Equipment managers place the O in the middle on the back of the helmet and affix the national championship sticker. 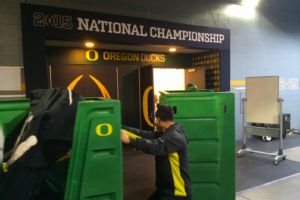 Being part of Nike’s research and development team is just as valuable to Oregon as the cost of these items. Nike designers frequently come to practice to test out cleats. One version might be the 30th iteration of a particular shoe. Another might be the 90th. Little tweaks are made with player feedback before the shoe can hit the market.

When a shoe is ready, Oregon players might get it first, which sometimes causes a problem for Farr.

“They immediately want to wear it because it’s cool,” Farr said. “Well, maybe they have an ankle issue or it’s not the proper shoe for them. I need to tell them that it’s about their performance first. If there’s a problem, I’ll usually bring in a trainer to back me up.”

There are truly custom items, too. Nike measured Mariota and built custom pads into his uniform underlayer. Riddell also did something special: Mariota’s facemask spells out “8-0-8,” which is the area code for Honolulu, where he grew up.

Farr and his staff also have to remember player preferences. Wide receiver Keanon Lowe likes to get his new gloves days in advance so that he can break them in. Center Hroniss Grasu gets the cage frame facemask made famous by Ray Lewis and Justin Tuck in the NFL. 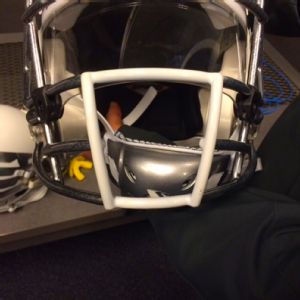 Farr’s biggest mistake came during his first full year. “Our quarterback Darron Thomas wore rib pads and we went on the road for a game and I forgot the shirt that held those pads,” Farr said. “So I had to make the shirt from scratch.” All the equipment is carefully accounted for, but there are some redundancies — including four different Mariota jerseys — built in just in case.

Farr is a mild-mannered guy, and he admits his job is much more enjoyable when his players do what is expected of them. Take the pads out of your pants when you are done. Sort your uniform after practice before it goes in the laundry. Try not to lose stuff.

Redshirt freshman Danny Mattingly is the team’s greatest offender. “I misplace things,” Mattingly admits. “So I’ll see someone else’s shirt lying around and I’ll put it on and wear it.” Mattingly says he has recently taken a liking to a shirt that is the property of offensive lineman Andre Yruretagoyena. “It’s a 4XL,” Mattingly said.

“I asked the guys to look around their apartment and bring in what they had so we could be ready for the Rose Bowl and the championship game,” Farr said. “Danny brings in two pieces of gear. He says, ‘Is this OK?'”

The cool factor associated with all of Oregon’s gear isn’t lost on its potential future. Almost all recruits get an equipment room tour from Farr, even though making custom jerseys or giving them anything has long been off the table. “They ask me what special Jordans we are going to get next year,” Farr says.

Mariota’s favorite shoe was the special makeup of the Air Jordan III’s that were given out a couple of years ago. The shoe was so rare and so desired that shoe reseller Flight Club in New York currently lists a pair for sale for $6,500. 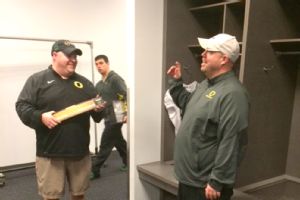 Working on the staff is even a highly coveted position. Escatel and Kwame Mitchell, a senior who rocks a hi-top fade and is nicknamed “Chocolate Thunder,” are graduating, which means there will be two spots up for grabs on the team. Farr expects 40 applications, and after interviews, he’ll narrow it down to 10 and the finalists will get a look during spring ball. Those who get the spot get a scholarship: in-state tuition and books, worth about $10,000 a year.

With Nike’s help, Oregon has not only revolutionized the college football uniform game, but also changed the scope of the job done by the people behind the scenes to continue to bring it all together.